A Wheel of Time Wiki
Register
Don't have an account?
Sign In
Advertisement
in: Seanchan animals, Animals
English

View source
watch 01:40
Boba Fett Returns - The Loop
Do you like this video?
Play Sound

Grolm are a species of animal used by the Seanchan.

Grolm are the size of large bears, only with the gray green coloration and skin texture of very tough frogs. Like the torm, they have three eyes. Their diet consists of whatever is at hand, including their own dead.[1]

When walking, grolm appear almost awkward, moving with a waddling motion. All traces of awkwardness vanish when they run, as they can cover great leaps of ground in a hurry. Grolm communicate using a sharp, short barking call. With this call, they alert others of the species nearby that food has been located. Grolm travel in small packs of only a handful of individuals. When a victim has been located, they communicate over large distances using a short, gutteral barking call. With this call they alert other packs to join the chase. This behavior was first seen inThe Great Hunt when Rand al'Thor, Loial the Ogier and Hurin became accidentally trapped in a Mirror World.

Grolm are used in battle, though normally only against lightly armored opponents to break holes in an enemy line which will then be quickly exploited by human soldiers. They are very useful against cavalry, as horses often panic in their presence unless specifically trained to tolerate the grolm.

Grolm are difficult to kill because to be killed quickly, an arrow must be driven through their eye. Another significant factor is the sheer number of Grolm who will answer the call of their kin. In the Mirror World which was mentioned above, food was scarce as to the Trolloc clans apparent victory over Artur Hawkwing's Empire (This is known because of the Trolloc spire erected in the place which in the real world, the spire made to commemorate Artur Hawkwing's victory once stood.) Henceforth, the Trollocs had pillaged every other reliable source of food since they were largely unopposed after their victory. Grolm also have very good vision, a keen sense of smell, and are extremely territorial.

Grolm were first seen in the The Great Hunt by Rand al'Thor, in a Mirror World. It is confirmed in The World of Robert Jordan's The Wheel of Time that all the exotic creatures used by the Seanchan were brought to the real world using Portal Stones sometime after the Breaking of the World to use against Shadowspawn.

Grolm riders in Seanchan are called morat'grolm with masters or leaders in the animal are called der'morat'grolm. 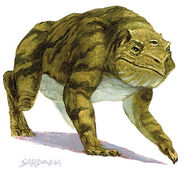 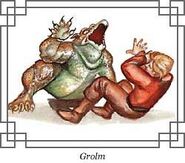 Grolm attacking in a Mirror World