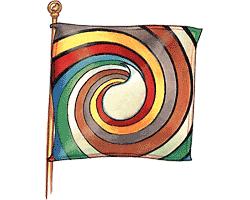 For other uses of the word "tower," see Tower.

During the Schism there were two Halls, one in the Tower loyal to Elaida do Avriny a'Roihan and the Rebel Hall loyal to Egwene al'Vere. Each Hall had only eighteen members as opposed to the usual twenty-one; however, this is only official in the Tower, where Elaida has decreed the Blue Ajah out of existence. Since the reunification of the Tower, the Tower and Rebel Halls will need to combine their members. See Hall of the Tower under Egwene al'Vere for more information.

Each Ajah is represented by three Sitters, chosen inside the Ajah according to its rules and customs. It is unusual for a sister to take a seat in the Hall before wearing the shawl for at least seventy years (which also usually means to be around or more than one hundred years old, because sisters are usually raised to the shawl around their thirtieth year of life); despite this last custom of a properly age recently many Sitters were elected very young, but still among the strongest; another custom recently not very respected is that former Sitter generally do not return to the Hall after a previous, relatively long tenure or after having recently left.

Usually in the choice of a Sitter by an Ajah are considered many aspects:

As said among the Sitters usually there are the strongest Aes Sedai, but on the contrary we can consider the case of Suana Dragand that was elected Sitter and even Ajah Head because of her stunning healing Talent and her political abilities, not for her relative high-middling strength at level 22(10), which could be considered the lesser level in the Hall[1].

The Hall can convene both formally and informally in a meeting known as a Sitting, during which the Hall may vote, discuss important information, or question people summoned to the Hall. There are special rules governing such a meeting.

"There were many more traditions and customs than laws, and the light knew there were more laws than anyone every really knew. Often contradictory layers of law laid down over the centuries. But tradition and custom ruled Aes Sedai as much as Tower Law ever had"
—Crossroads of Twilight on Tower Law

Decorum during a sitting

Keeper of the Chronicles

There are two forms of agreement: the greater consensus and the lesser consensus.

Examples of the lesser consensus passing despite lacking the greater consensus are when Sitters outright refuse, or when an ajah can not be present.

For a matter to pass with the greater consensus, all Sitters present must stand for it. In addition, a majority of the Hall (traditionally eleven members) must be present, including at least one from each Ajah. An exception to the latter requirement is a vote to remove an Amyrlin or Keeper of the Chronicles, in which case the officer's former Ajah will not be informed until after the vote.

A further voting system, which can consist of two rounds, is used to raise the Amyrlin Seat. If all the participating Sitters stand in the first round, the woman is elected without needing a second round. If the woman receives the support of only the majority of the Sitters (eleven) a second round is required; before the second round the woman must pledge for her election washing the feet of the reluctant Sitters and after it she needs to receive a unanimous vote. Despite requiring unanimity on the second round, a vote to raise an Amyrlin is distinct from the greater consensus, because it does not need the presence of all the 21 Sitters and also it does not require that all Ajahs be present. In fact when Elaida was raised in the Tower, and when Egwene was raised in Salidar, an Ajah was missing (the Blue and Red, respectively).

In addition, Egwene thinks to herself that under the old rules, eleven Sitters were not enough to raise an Amyrlin, but that "now only eleven were required." Thus, a higher quorum is another difference from the greater consensus. Because eleven is approximately 61% of eighteen (or around 3/5), it is likely that thirteen (approximately 61% of twenty-one) is the usual quorum for raising an Amyrlin.

Under the Law of War, the Amyrlin does not need to consult the Hall to make decisions regarding prosecution of the war.[3]

Age and Strength of the Sitters

The Age and the Strength in saidar of the Sitters (or former Sitters at the moment of reunification) based on "The Wheel of Time Companion" levels (the levels of strength given by "The Wheel of Time Companion" have to be taken very cautiously. In too many cases they are completely in contradiction to the descriptions of strength that we can find in the main WoT books or thinghs stated in TWoTC itself). For instance the positions of Cadsuane, Aviendha, Graendal, Semirhage, Mesaana, Viendre, Kwamesa, and others are totally wrong; also too many Sitters in the Hall are classified in low levels, among Aes Sedai described in the books having an average strength). [In Italic is reported the most likely strength level based on the years in training]

Retrieved from "https://wot.fandom.com/wiki/Hall_of_the_Tower?oldid=125981"
Community content is available under CC-BY-SA unless otherwise noted.