A Wheel of Time Wiki
Register
Don't have an account?
Sign In
Advertisement
in: Wotwiki featured articles, Citation needed, Shadowspawn,
and 2 more
English

View source
watch 02:56
Doctor Strange in The Multiverse o Madness - The Loop
Do you like this video?
Play Sound

"Fades are Trolloc spawn, throwbacks almost to the human stock the Dreadlords used to make the Trollocs. Almost. But if the human strain is made stronger, so is the taint that twists the Trollocs. Halfmen have powers of a kind, the sort that stem from the Dark One."
—Lan Mandragoran

Myrddraal (pronounced: MUHRD-draal) are Shadowspawn, muscular and serpent-quick, with lank black hair and waxy-white skin. They have no eyes, but can "see" with perfect clarity. Their appearance never varies; they are always male in appearance, with identical features and builds described as being like that of a tall man. They were the battle leaders of the Shadow during the imprisonment of the Forsaken, after the demise of the Dreadlords.

Myrddraal are genetically Trolloc offspring, but are throwbacks to their human origin; for some reason, throwbacks to the animal side of Trollocs' genetic heritage never survive. Their names, where known, are in the Trolloc tongue. One theory holds that Myrddraal are created by whatever allows humans to channel; this may also explain why they are needed for turning a channeler to the Dark One. This theory is supported by the fact that around 5% of all Trolloc offspring are Myrddraal, roughly the same ratio as channelers amongst humans.[verify] However, they, like all other forms of Shadowspawn, cannot channel.

They are believed to be sterile; no female specimen has ever been seen. For some reason, they are reported to lack a sense of humor by both Light and Dark. Myddraal do not have dreams. Even though sterile Myrddraal are inferred to be sadistic and rapacious toward women, as it is stated that women do not long remain sane in Myrddraal hands, and being given to the Myrddraal is used as a threat and punishment toward female Forsaken and Black Ajah.

Myrddraal wear black armor with overlapping scales, and black cloaks which do not stir in the wind. They are able to move between, or disappear into, shadows, and mirrors only reflect a misty image of them. Graendal comments that this ability has always made the Forsaken uneasy. Aginor, the Forsaken who created the Trollocs, and thus (inadvertently) Myrddraal, theorized that they were "slightly out of phase with time and reality," but was unable to prove his thesis despite extensive, often fatal, testing, and many were killed when he tried to discover how they disappear into shadows; not even they know themselves.

Their blood is acidic and will etch steel if not cleaned off; their fingernails are hard enough to scratch wood. Fades are also much stronger than human beings, and can lift someone from the ground with one hand. The only things they fear are running water, Shadar Logoth, Slayer, Padan Fain, and the Dark One himself.

They may be able to see the residue of a Gateway.[1] (The description is ambiguous whether it is the ability of all Myrddraal or only one particular one.)

Myrddraal are quick and strong, and are usually employed as the Shadow's battle lords, having a greater degree of cunning and sense of tactics than the bestial Trollocs. In addition, they have the ability to sense channeling after a fashion, and can use their ability to cause fear and slip in and out of shadows to function as assassins, although they are not as specialized for this purpose as Draghkar, Gray Men, and gholam.

Myrddraal are most often seen leading fists of Trollocs, and sometimes "link" with them to achieve even greater control. However, this comes at a cost - dealing a Myrddraal a killing blow will instantly kill any Trollocs linked to it, even though the Myrddraal itself will not die until sunset.

All Myrddraal appear to be equally skilled with a sword, though less skilled than a blademaster. Myrddraal wield black-bladed swords made at Thakan'dar, on the slopes of Shayol Ghul. The swords' properties are similar to those of Power-wrought blades, though they are not quite as sturdy. The blades fail after some time, needing a regular replacing by new ones[2]. Mryddraal blades are dipped in the black river that runs through Thakan'dar, which gives their edges a lethal corrupting effect; even a slight scratch from a Myrddraal blade is usually fatal unless an Aes Sedai is present to Heal the injury. The forging of the blades also requires a single living human; the execution of this victim with the blade itself completes the forging in some way. Many victims of raids on the Borderlands are taken to Thakan'dar to serve as sacrifices in this way.

Another major weapon in a Myrddraal's arsenal is fear. Myrddraal have the innate ability to instill stark terror in anyone they gaze upon: "The look of the Eyeless is fear," as Borderlanders say. However, it is more than possible to control this reaction.

Myrddraal are incredibly difficult to kill due to their viperish speed and immense strength.  Normal wounds, such as a blade or arrow to the heart, will not kill a Myrddraal, though it will be slowed by such wounds. It takes dozens of arrows or bolts to kill a Myrddraal, though the easiest way to kill one is to remove its head. The best way (according to some) to fight a Myrddraal is to overwhelm it before it can overwhelm you.

Even after dealing a killing blow to a Myrddraal it will not die immediately. While they are in their death throes, they are still extremely dangerous, as their headless/damaged body will continue to thrash blindly, often still holding their sword or rending with their fingernails. A Myrddraal only finishes dying at the setting of the sun. Any trollocs linked to the Myrddraall, however, die the instant it is dealt a fatal blow.

Killing a Myrddraal earns one the title of Dreadbane in the Borderlands, whether someone was simply the one to deal the killing blow after it had taken many other wounds or if one met it in single combat.

Myrddraal have their place in the legend and lore of most of the world's societies, where they are known by many names: Halfmen, the Eyeless, Shadowmen, Lurks (Tear), Fetches (Illian), Fades (Andor), Nightrunners (Aiel), Nightrider (Da'shain Aiel)[3][4], and Neverborn (wolves). In most nations, they are treated about as seriously as bogeymen, but those in the Borderlands or who have had the misfortune to encounter them know better. 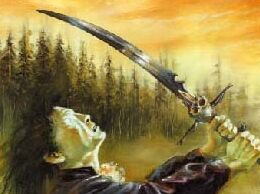 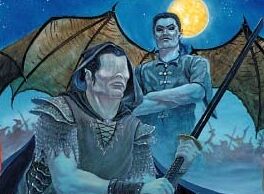 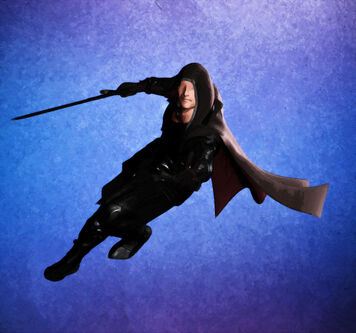 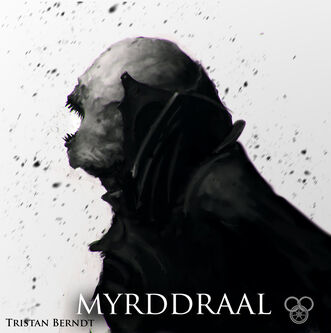