A Wheel of Time Wiki
Register
Don't have an account?
Sign In
Advertisement
in: The Shadow Rising chapter summaries

< The Shadow Rising
View source
"Not one of the Forsaken. I think not. This was too simple. And too complex. As the Seals holding the Dark One's prison weaken, it may be inevitable that a...miasma...will escape even while he is still held. Like bubbles rising from the things rotting on the bottom of a pond. But the bubbles will drift through the Pattern until they attach to a thread and burst."


—Moiraine on bubbles of evil

Perrin and Faile make their way through the Stone of Tear to confront Rand about a bizarre event during which they were assaulted by Perrin's axe.[1] On their way they meet High Lord Torean, who angers Perrin with his "tone" and the way he looks at Faile. Perrin and Faile proceed to bicker over his reaction to Torean's conversation with them. They see Berelain bolting down the hall where Torean grabs her and they have a speedy conversation. Faile mistakes why Perrin stares at Berelain but what he noticed was her scent of fear and panic. Faile decides to return to bed and let Perrin go meet the Dragon on his own, but not before being amused by his misunderstanding of the situation.

"I do not care if she smelled of the Essence of Dawn. That one is not interested in hunting a bear, however fine his hide would look stretched on a wall. She hunts the sun"
—Faile on Berelain

Perrin makes his way to Rand's room, passing The Defenders and Rand's "real" guards, the Maidens of the Spear. The Maidens give Perrin trouble as he tries to enter Rand's room, trying to goad him into playing Maidens' Kiss. They finally yield and let him enter.

Perrin becomes alarmed by Rand's appearance and shouts for one of the Maidens to get Moiraine. Rand tells Perrin to shut the door. Helpless, Perrin tries to stop the worse cuts from bleeding out before the Aes Sedai arrives to Heal his friend. He asks Rand what did he try to do and Rand responds that it was one of the Forsaken. They both worry over Mat and guess about his whereabouts.

Rhuarc enters telling Rand that rumors of what happened are starting to surface, following on Rhuarc's heels is Moiraine, who also demands to hear what has happened, Lan enters behind her. Silent sparks erupt between the two warriors but Rand's condition seems to ease the tension.

"I thought you were old enough to shave without someone to guide your hand."


—Lan and Rhuarc on Rand

Moiraine attempts to Heal Rand, using the aid of him embracing Saidin, but he is unable to grasp the Void. The Aes Sedai heals him, but expresses concern that the wound at his side still refuses to respond. [2][3] Rand believes that it will be the wound that kills him. 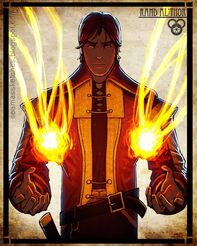 That is the one that will kill me, isn't it? His blood on the rocks of Shayol Ghul, washing away the Shadow, sacrifice for men's salvation. 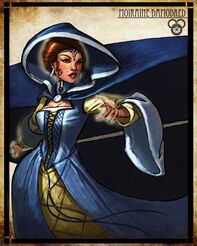 You read to much, and understand too little. 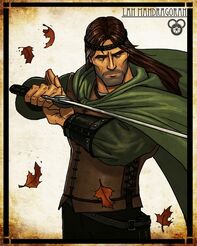 He is only trying to find his way. No man likes to run forward blindly when he knows there is a cliff somewhere ahead.

Moiraine changes the subject to his bedding, but Rand refuses to leave.

"I will sleep here, Moiraine. I won't be chased any more. Not even out of bed."
—Rand

Rand explains uneasily what happened to him, and hypothesizes that one of the Forsaken attempted to murder him, possibly Sammael. Moiraine says it is the Dark One reaching out, creating bubbles of evil.

Moiraine then tries to talk Rand into making a decision, saying that the Tarien's fear of him will only last so long before they try plotting against him. Rand says for her not to rush him, before dismissing the group and telling Perrin that they will speak tomorrow.

Perrin and Rhuarc discuss the similarities between The Dragon and He Who Comes With Dawn, and the two prophecies, with Rhuarc mentioning that Rand still has to prove himself, and he and he alone will know what to do. Rhuarc bids Perrin a good night.

After Rhuarc leaves Perrin studies the Tarien officer's face and feels that it won't be safe in the Stone of Tear after the Aiel leaves, and heads to his room to convince Faile to leave.

Community content is available under CC-BY-SA unless otherwise noted.
Advertisement